• 31 Oct. 2016 -New Moon in Scorpio conjunct the Metaphysical Moon; Diving deep within and going to the inner void. 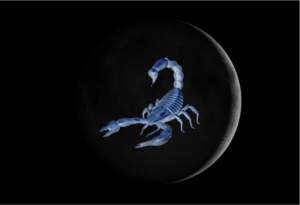 On 30th October we experience a New Moon in the first decade of Scorpio. This happens every year so that is not so rare.

But this New Scorpio Moon is now conjunct the Metaphysical or Dark Moon. (Later I will come back on the differences between Dark Moon, Black Moon, Lilith and Metaphyscial Moon). This Moon is in its apogeum so in its orbit at her longest distance from earth.

This Scorpio New Moon may draw you into the deep inner realms or your being. In your yourney down you may experience deep and intense emotions of which you may not even have realized they’re there. These emotions and feelings are very likely to be triggered by persons or situations in your life. They are the catalysts who bring up what is in the shadow of your being. You may experience intense emotions of feeling powerless of feeling a victim of power and manipulation. The challenge of this New Moon is that you find out what the convictions are that keep you in that role. What is deep down inside you that makes you unhappy can now come up to the surface. Now is the time that you can become aware of it and …. release! This whole month is the time to transform of what is hidden in you.

Be aware that with this New Scorpio Moon these persons act as bit-players and hold up a mirror for you to look into. What does this mirror cause in you? Anger? Sadness? Fear? Don’t get angry with the one who holds up the mirror! Use the mirror to dive within and dismantle the patterns that have kept you stuck for so long. Thank you mirror!

Do you remember the most impressive and magnificent Super Full Moon in Libra very recently? There the Moon was at its closest distance from Earth in its perigeum.

Now the New Moon is at its largest distance in Scorpio and here the Moon also gets different qualities because now she becomes an anti Moon. And at this point in the orbit she almost comes to a standstill. This may cause a feeling of emptiness in you. But the emptiness is in fact a void, an empty space. Here is the stillness of your own inner universe where there are no names, no concepts, in fact nothing is familiar. (Family – Moon) . Here everything is new.

This New Scorpio Moon will not only bring you deep into a quest of your inner psychological world but since the Moon is at her longest distance it will also give you to the possibility to enter the space in yourself beyond your psychological self to the infitiny of your inner universe. A beautiful month to travel inside not only to the shadow part in yourself but also beyond – space traveling – into the vastnest and magnificence of your inner universe. Don’t be afraid of the void! Because that is the place where everyting becomes really new!